Posted at 05:30h in Chess Basics by Sanjana Chandan
0 Likes Winning a game is the best part of playing this mystical game of chess. This understanding of the most basic checkmates of the game is a building block for the journey of a winner. The most basic and easy checkmates require minimum skill but loads of attention and memory.

Let’s take a look at some of these easy, short, and sweet checkmates. This is the fastest possible checkmate, which allows you to win a game in two moves.

Unfortunately, it completely depends on White’s opening moves, so Black doesn’t have much control over whether this checkmate will definitely take place or not. White just begins the game by playing f3 and then playing g4 on the second move, opening up the diagonal adjacent to the King.

This situation allows the Black Queen to comfortably sit on the h4 square and pose a checkmate on the White King. 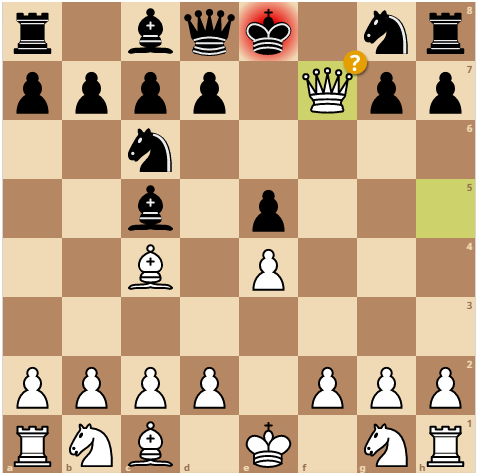 This is a very simple four-move checkmate which is the first checkmate every Beginner learns since it begins with King Pawn Opening. The pattern follows with Bishop’s development, and White removes the Queen early into the game, a move Beginners are usually told to avoid.

The target is for the Queen to capture the f7 pawn with the support of the White Bishop on c4 to checkmate the Black King. This is a four-move checkmate that exploits a position where the King is trapped by its own pieces. Black uses the knight to invade the King’s territory and poses a checkmate upon the trapped King.

This pattern also begins with the King pawn, followed by the development of the knights instead of the Bishop, as we saw in the Scholars Mate. White then further restricts the King by moving the pawn to g3, also allowing the Black Knight to occupy the f3 square and to checkmate the White King.

This mate gets its’ name from the smothered position of the King when this checkmate takes place.

This is also a type of checkmate which begins with the King Pawn Opening, followed by Black bringing the Queen out early into the game.

The checkmate takes place in 6 moves involving a beautiful Queen sacrifice. White and Black both develop their Queenside Knights, followed by Black bringing the c6 Knight to the center and then to f3 to checkmate the King. The end position here is similar to that in the Smothered Mate.

This is a checkmate that takes place in seven moves beginning with the King Pawn Opening.

White then proceeds to develop the Bishop and Knight while Black develops the Queenside Bishop. The Black Bishop pins the White Knight f6 with the Queen behind the pinned piece. White goes ahead and sacrifices the Queen by playing Nxe5. Once Black grabs the Queen, the Bishop grabs the pawn on f7, checking the King and forcing the King to move to e7, to which White responds with Nd5 checkmating the Black King.

These are the five easiest checkmates to memorize and follow with easy patterns. Hopefully, this will add excitement to the game every beginner is playing to win.