Posted at 08:11h in by klubventures 0 Comments
0 Likes

Sorry, the comment form is closed at this time. The Sicilian Alapin Variation is White’s response to c5 by playing the move c3.

The variation is named after Russian master Semyon Alapin. This variation is a great escape from the mainline that can get extremely unstable and sharp. This variation was played by World Champions like Vishwanathan Anand, Garry Kasparov and Vladimir Kramnik.

Since this variation forces the game to drift away from the mainline, it is referred to as anti-Sicilian. Since the Sicilian Defense is a very strong defence that seems to take a large amount of initiative in the game, the Alapin variation takes away all the initiative. It puts White back into the driver’s seat.

Semyon Zinovyevich Alapin, who the opening is named after, was a Russain Chess Master, opening analyst and puzzle composer. He is famous for creating variations in multiple opening systems, Alapin being the most famous of them all. The Deep Blue chess computer played the Alapin Variation against Garry Kasparov in their 1996 match, to avoid a mainline of Sicilian Defense that Kasparov’s had a lifetime of experience playing.

The Alapin has a bad reputation of a “lazy move”, or an opening that one plays to avoid theory. However, the Alapin is a good opening, that almost always guarantees White an equal or slightly better position in the opening.

White’s c3 move here protects the d4 square that Black currently controls with the d5 pawn. This variation is a simple opening, with White’s primary motive being to cover the d4 square and to try to gain central control at all times. There are barely any traps or gambits in this variation, simplifying this line of playing against the Sicilian Defense. Moreover, most Sicilian Defense players do not expect White to play c3 and thus perform inadequately as Black isn’t always well prepared for this variation. This the most common response to c3, followed by White playing e5 and Black playing Nd5. White now has options like d4, Nf3 and Bc4 to play to keep the central control which is the main motive of this variation. White is now in a stable position with the opportunity to develop the minor pieces comfortably, while Black has limited scope to set up tracks or gain an attacking position. Although Black’s night may be in the centre after Nd5, Black will find it relatively harder to develop all the Black pieces comfortably. This line is also considered to be the most popular and best line under the Alapin Variation of the Sicilian Defense.

The goal here is to develop pieces while gaining central control. White also gains more pace and limits Black’s space, making it difficult for Black to develop the minor pieces. The main idea of the second move c3 is to play the d4 next. This allows White to grab hold of the centre and develop the minor pieces comfortably. Although playing c3 does block the square and blocks Nc3, the knight can easily find a home on d2 or and in some cases on the a3 square.

Black can respond to White’s d4 by capturing the pawn on d4 to which White would also play cxd4 to maintain central control. Black can then play d6 followed by Nc6, with an incentive to bring out all the minor pieces.

Multiple subvariations of the Alapin variation arise depending on Black’s response to White’s c3. Here are the most common responses: 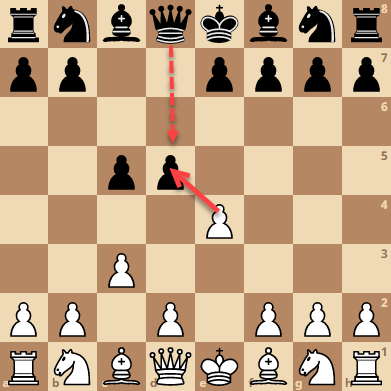 After Nf6, this is the second-best alternative move the Sicilian Defense; players choose to play against White’s c3. White usually plays exd5, followed by Black playing Qxd5. This line is called the Barmen Defense. If White played e5 instead of exd5, and Black responds with e6, this line will transpose into the French Defense Advanced Variation. This variation leads to a favourable position for Black since a pawn chain no longer blocks the Black Bishop. If White plays exd5 after d5, then Black may also play Nf6, but that may lead to a minor disadvantage for Black. The notations for this line are as follows: This is considered to be Black’s most stable response to c3, preparing for Black’s d5. It is very similar to the French Defense that it usually transposes into if White plays d4. After d4, this line may even transpose into the Tarrasch French Defense. The notations for this line are as follows:

This response usually leads to Black offering a gambit. The game usually follows the following pattern:

A sideline of this variation includes Black responding with the following moves: b6, g6 and Qa5. These moves do not directly attack the e4 pawn and allow White to have relative control of the centre.

Since there is an exchange of the pawns on the centre of the board, White has a lot of open files making White exposed to rather sharp gameplay. This can may become a tricky situation further into the game for White, hence White must be careful of these open files.

1. Why play the Sicilian Alapin opening?

Since the usual responses to the Sicilian defence can take a sharp turn and make the gameplay slightly difficult, this is a great opening to avoid the threats and traps that the Sicilian Defense offers.

2. Is the Alapin variation good for beginners?

The arising positions post the Alapin Variations are playable, and there are no forced draws that arise. It easily avoids the sharp turn that the open Sicilian Defense takes and allows White to hold favourable stakes throughout the game. Sometimes, White may transpose the position to the Alapin Variation during Sicilian by playing Nf3. The game then takes the following turn:

This variation also helps White to focus on the centre and gain central control. Hence, the Alapin Variation is a safe alternative as a response to the Sicilian Defense, in case White wishes to avoid the sharp course that the Sicilian Defense usually takes.